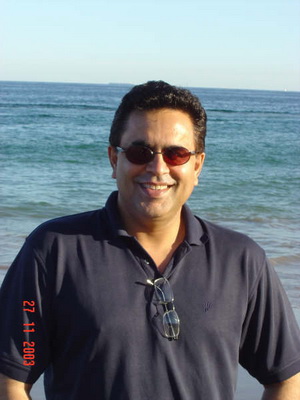 I studied at Cantt Public from 1961 till 1971. I later went to St Patricks College karachi. Following family traditions, I joined Pakistan Army in 1974. In 1979 I went to London to study for my MBA degree.

I joined Unilever Pakistan from 1982 till Jan 2000, and served in various middle and senior management positions in Pakistan, Bangladesh, the Middle East and USA.

In 2000, we moved to Dubai and took up a challenging assignment as am aging director of a large FMG company. In May 2005 I moved to Kuwait, where I run a large electronics retail business.

My wife and 3 teenage kids still live in Dubai, so I spend 4 night in Kuwait and 3 in Dubai every week.

I still follow my old passion of painting and writing poetry. Some of you may recall that I was declared the best artist in Cantt Public for several years.

I would love to hear from some of you, especially the class of 1971.

Apart from me, my 2 younger brothers also studied at Cantt Public. Shaheen Nawaz Khan (shaheed) 71 GD Pilot, who laid down his life for our motherland, in 1981. He was in the class of 1973.

My youngest brother, Shahzad Nawaz Khan is still in Karachi, and has made a name for himself in graphic designing, film production and several other creative pursuits. He left Cantt Public in the early eighties.