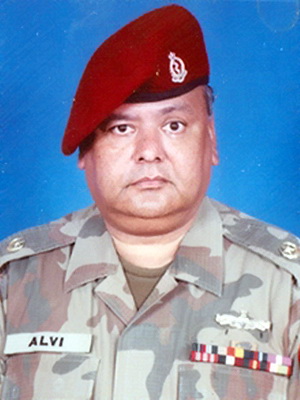 I am a Doctor in the Pakistan Army. I have been on deputation to Pakistan Rangers, Sindh at Qasim Ranger and in Hyderabad killed a dacoit in a Bank Robbery case. I was awarded Imtiazi Sanad for Ant-Terrorism on March 23, 1999 by the President of Pakistan. The list was published on March 24, 1999 (see cutting from Dawn News below)..

I was a very weak student till Matric, having a very low profile. But after Matric, I got First Division in F.Sc and got admission in NED University. At the same time, I gave additional papers in Biology and got 83 percent, and I was admitted in Sindh Medical College. I got First Class First position in 4th POOF MBBS Exam.

I was assessed by Late Principal M.E. Hyder to my father Mr. Abdul Hamid Alvi that “this boy is a late bloomer, and will shine after matric”. Mr. M.E. hyder was a great educationist.